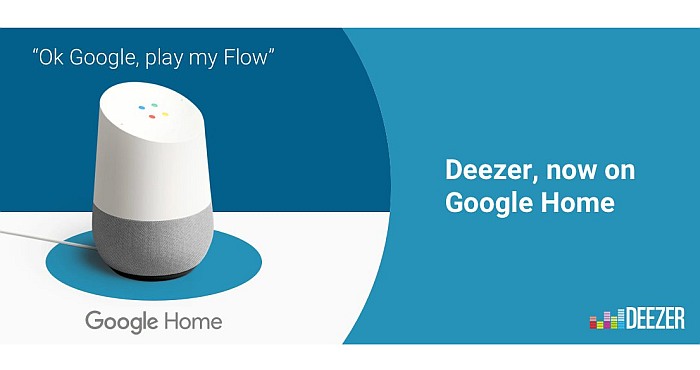 This month, August 2017, Deezer, the dynamic and most diverse music streaming app, has announced its platform integration with Google Home. You can now play your favorite music genre, albums, playlists, artists, or just specific single tracks on Deezer completely hands-free with a simple voice command to the voice-activated speaker of Google Home which is powered by Google Assistant. This comes as a first of many greater steps all aiming at achieving a more personalized user experience with Deezer, as promised by the Deezer VP Hardware Partnerships, Riad Hawa.

Voice-activated speakers are expected to be used in 35.6 million homes in America once every month of this year. This integration of Google’s amazing voice command recognition into Deezer is a definite win for music lovers allowing them to enjoy what’s best about technology. If you have a Deezer Premium +, which you can have for one month as a free trial and then for $9.99 a month, you’ll be able to have a more personally specified musical experience just by telling the smart assistant what you want to listen to, and it’ll do all the work. Moreover, the Google voice recognition on Deezer is able to differentiate between voices which means it can tell whether it’s your own voice saying the command so it will play your own playlist, or it is someone else, let’s say a friend or a family member who uses Deezer from your phone, so it will play something else.

There is also a feature named Flow that, once your account is set up, will allow Google Assistant to recognize your voice asking to play your personal, customized flow. Flow, according to Deezer, is a personal track that uses algorithm with personal recommendations as well as smart data to play the tracks that you’d want to listen to. The Flow feature is one of the most popular features that Deezer has, and the fact that users have it now available on Google home really makes Deezer standout in the music app world.

Deezer as part of Google home features is available for Android and IOS phones. So, whatever phone system you are using, Deezer is your way to enjoy instant access to unlimited 43 million tracks and 18 out of 74 genres out there that Deezer is able to recognize.

Deezer’s voice recognition on Google Home is available only in the United States, the United Kingdom, Australia, and Canada in three languages, English, French, and German, for now.